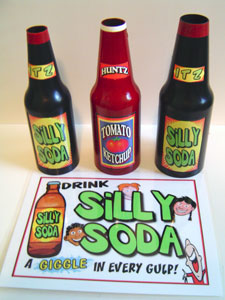 The Trickiest of Bottles

It starts off like the regular topsy turvy routine but that's where the similarity ends!

The magician introduces a sign from the Silly Soda Bottling Company and explains it is the newest soda on the market. "It has giggles in every gulp. Just listen." He leans over toward the sign and a funny laughing sound effect is heard.

The first time the magician''s bottle is magically upside down in the tube but the child's is right side up. They again set up the same way but this time after turning the bottles over, the magican pulls his bottle out by the neck and the child fights to grab his bottle because it is upside down. The magician will wait so the child can catch up.

He offers the child a magic hat or tallisman (use your favorite gag prop or hat) to help, but the magician's bottle is always facing a different direction than the child's.

Actually it's the audience that was missing the plot and they were the ones who had to catch up. Upon lifting his tube, the magician reveals he is using a bottle of ketchup!