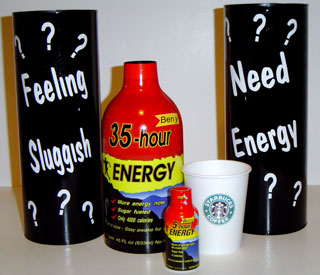 A classic trick brought into the 21st Century!

"Feeling sluggish? Need Energy? Don't asettle for just a cup of coffee when you can have this... 35 Hour Energy! You can get a week's worth of work done in just hours!"

The magician shows both tubes empty and shows that they both fit over the cup and the bottle. He is now going to make them change places. He makes a magic gesture, and explains that they have changed places but doesn't show the audience.

"That was the easy part. The hard part is to make them go back!" I know this is a very old gag, but it still gets a laugh. He then lifts both tubes to show the items in their original places while the audience groans.

"Being a professional magician, I will try to do it again. It's much harder to do this way. The magician repeats the effect making the bottle and cup change places and does it one more time putting the cup and bottle back in their original places. He goes through the motions again of showing that the tubes fit over the cup and the bottle, and shows the two empty tubes for the climax.